If you are in a hurry and just want to find out what the best odor eliminating candle is, then we recommend Gerard Larriett Deodorizing Soy Candle as the best one.

Struggling with household odors and don’t know what to do? Odor eliminator candles might be the cure for your headaches.

In this article, we’re going to review the following odor eliminating candles: 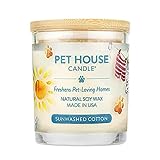 If you want to go all-natural, then this odor eliminating candle by One Fur All perhaps is a great choice. Aside from that, this candle is specifically formulated to battle pet odors.

According to One Fur All, this candle contains no dyes, phthalates, paraffin, parabens, or formaldehydes. It’s also made with soy wax that emits no harmful pollutants. Given that this odor eliminating candle is aimed at pets, it’s certainly a welcome feature that it’s made from natural ingredients.

The One Fur All odor eliminator candle is also scented. The particular scent we based our review on was Sunwashed Cotton, but there are a few dozen other floral fragrances that you could choose from.

One jar of the candle includes 8.5 ounces of wax, allowing for up to around 60 hours of burning time, which is a lot for this amount of wax.

However, for its size, the One Fur All candle is pretty pricey, though this probably is due to its all-natural formulation. 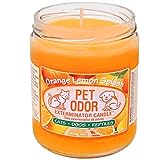 The Pet Odor Exterminator candle is noticeably less expensive than the One Fur All candle, so it perhaps is a good option for buyers with a tight budget. Despite its cheapness, this odor eliminator candle still has a few interesting things to offer.

Most notably, this candle is claimed to eliminate not only pet odors but also smoke and other household odors. It seems like a good all-around odor eliminator candle, but for specifically pet odors, the One Fur All candle might be better.

One jar includes 13 ounces of wax and allows for about 70 hours of burning time. This candle isn’t as efficient as the One Fur All candle, but it has a good burn time nonetheless.

The scents of the Pet Odor Exterminator are mostly sweet-oriented. You can choose from such scents as orange lemon splash, mulberry & spice, cinnamon sprinkle, and a few others. Be mindful that the food-y scents may limit the areas where this candle is suitable for.

The Pet Odor Exterminator candle is also claimed to be endorsed by veterinarians, which may be a solid testimony to its safety and quality in spite of its paraffin & soy wax blend. Aside from that, the candle is highly rated by buyers as well, having nearly a thousand reviews and 4.3 stars on Amazon.

The Smoke Odor Exterminator candle, as you could guess, is formulated primarily to combat the odor from cigars, cigarettes, and pipes. It’s also advertised to be able to tackle pet and other household odors, but it will probably be best for smoke.

The wax formulation here is similar to that of the Pet Odor Exterminator candle. Both contain 13 ounces of wax that burns for about 70 hours, and both are made from a paraffin & soy blend.

The Pet Odor Exterminator candle is also available in a variety of scents, many more than all the other candles on the list. You can choose from a wide variety of floral, food-y, and forest-y scents.

We should also mention how insanely popular this odor exterminator candle is – as of this review’s writing, it had nearly 4k reviews and 4.2 stars on Amazon. It seems to have worked for many people, though certainly not for everyone.

In the end, if you have a problem with smoke odor, this odor eliminator candle may be worth a try.

This odor eliminator candle is formulated primarily for smoke as well, though it can also be effective against other household odors. But in contrast with the Smoke Odor Eliminator, this candle is made from soy wax, so it’s more environmentally friendly.

Notably, this odor eliminator candle has a self-trimming wick as well. This wick requires minimal manual trimming and should allow for better burning.

This candle is pretty pricey as well, probably because of its soy formulation. However, it’s not as expensive as the One Fur All candle.

Scent-wise, this odor eliminator candle is just decent. As of this review’s writing, there were only 2 scents available – the spicy Original Scent and the refreshing Fresh Linen. 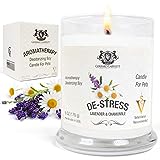 And lastly, we have the Gerard Larriett deodorizing soy candle. This candle is very similar to the One Fur All candle reviewed at the beginning in that it’s also made from all-natural ingredients. It’s likewise not very cost-efficient, but because it comes with only 6 ounces of wax, it’s less expensive upfront.

The Gerard Larriett odor eliminator candle is again formulated for pet odors, though it may work for other household odors as well. It also delivers a pretty decent burn time for the amount of included wax – about 40 hours.

Remarkably, this candle also contains essential oils for aromatherapy, which might be a very beneficial feature for some. And in terms of scents, the Gerard Larriett candle is focused on floral scents that should be suitable for many interior settings.

How Is An Odor Eliminator Candle Better Than A Scented Candle?

You might be wondering – how is an odor exterminator candle different from a regular scented candle? You could get rid of odors with a scented candle, so what’s the point?

Well, you could indeed deal with odors with a regular scented candle. However, an odor eliminator candle actually neutralizes the odors, whereas standard scented candles just mask them with a stronger scent.

Things To Look For In The Best Odor Eliminating Candle

Now, let’s talk about the key things that you should be looking for when shopping for an odor eliminating candle.

Deodorizing candles are made from wax just like any other candle. Most commonly, manufacturers use either paraffin or soy wax, or a blend thereof.

For odor neutralization, soy would probably be an ideal choice. This is because soy candles generally emit minimum smoke and soot and thus burn cleaner.

Paraffin is also thought to contribute to the formation of cancer, though the risk appears to be low unless you use paraffin candles every day for years. But if you are expecting to continuously need a deodorizing candle, perhaps avoiding paraffin would be more reasonable.

Paraffin generally has a stronger scent as well, but this probably won’t matter for odor elimination – since deodorizing candles directly neutralize odors, the strength of the after-scent won’t be too important.

Read our full article on What Is the Healthiest Candle to Burn.

Pay attention to what odors the odor eliminator candle is targeted at.

Deodorizing candles are mostly formulated either for smoke or pet odors. Some candles may be able to deal with a wide variety of household odors, but they probably won’t excel at the elimination of any specific odor.

When choosing a deodorizing candle, try to go as specific as you can. If your problem is smoke odor, then choose a candle formulated for smoke odor. A specialized candle will probably do a better job.

Odor eliminator candles usually not only neutralize odors but also emit scents, just like regular scented candles do. With this in mind, you should also pay attention to the scent of the desired candle.

We’ve talked about scents more in-depth in our roundup of the best scented candles, so you may go there for more info. Here, we’ll just briefly recap what is relevant to deodorizing candles.

Ideally, the scent of a deodorizing candle should:

Since your goal is to deodorize your home, you should avoid chemicals as well. These can emit unpleasant odors, as well as be unsafe for you and your pets.

Pay attention to how long the desired candle burns as well.

The burn time of a deodorizing candle mainly depends on the amount of wax. However, it can also depend on the quality of the candle.

Burning time perhaps won’t be important for everyone, but you should go for a long-burning candle if:

When checking the burning time, also check how much wax the desired candle comes with. This is important because even with the same amount of wax, one candle may burn longer than the other due to the formulation and quality differences.

And lastly, you should consider the cost of the candles.

You are likely to need deodorizing candles continuously. For example, if you have pets, then just one deodorizing session won’t be enough – you’ll have to use odor eliminator candles over and over again to keep your home odor-free.

With this in mind, try to understand how costly it would be for you to buy a candle in the long term.

Now, it’s time for us to announce our top pick!

We’re kind of split between the Gerard Larriett Deodorizing Soy Candle and One Fur All Natural Soy Wax Candle. Both are all-natural and safe, which is excellent considering that they are meant to eliminate pet odors.

If you are looking to get rid of smoke, then consider the Just Makes Scents Candles & Gifts Smoke & Odor Exterminator Candle. It’s also claimed to be natural, but it’s more aimed at smoke rather than pet odors.

Well, this wraps up our post! Now, it’s your turn – which candle is going to be the best odor eliminating candle for you?

If you are in a hurry and just want to find out what the best wicks for soy candles are, then we recommend the [amazon link="B015W8DWUO" title="EricX Light Cotton Candle Pre-Tabbed 6" Wicks" /] as...

A​s soy wax candles have become more and more common, you may have some questions about their sudden emergence and popularity. If you're anything like I was when I first heard about soy wax...