People love candles and they are more popular than most people realize. While it’s tempting to bring candles everywhere you go, the truth is that there are some places where it isn’t a very good idea to have a candle and one of those places is your vehicle.

If you’ve ever wondered if it is dangerous to light a candle while you’re in a moving car, just know that while this isn’t dangerous as a general rule, it has the potential to be extremely dangerous in certain circumstances. And this is an important thing to remember.

It might be difficult to imagine why someone might want to light a candle in a moving vehicle to begin with but each of us is different. But before you decide to light a candle the next time you’re in your car, there are some things you should keep in mind first. 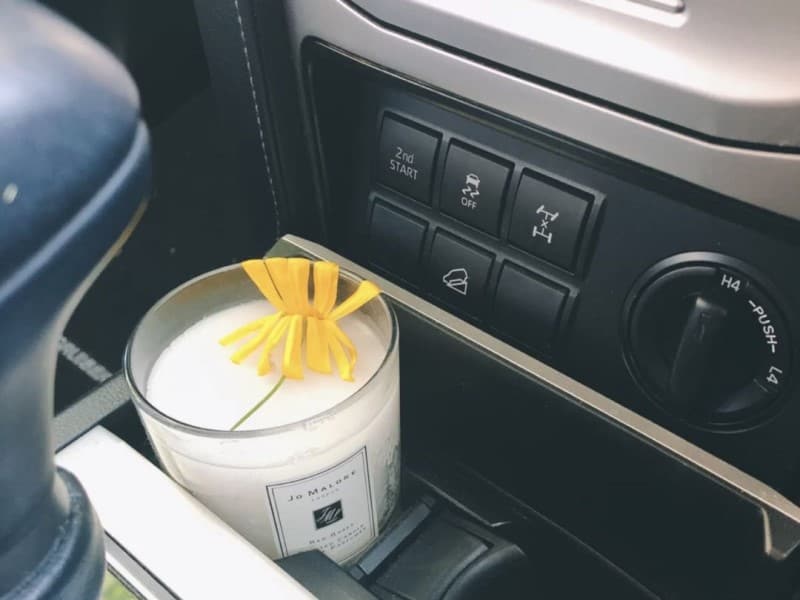 What Makes it Dangerous?

Although you can conceivably have a lit candle in a moving vehicle and still be safe, there are still a lot of different ways that it can turn into a tragedy very easily. First of all, if you’re in the car alone and light a candle, you simply won’t be able to concentrate on driving safely from that point forward. You could take one or more hands off of the steering wheel and therefore lose track of the candle. You could accidentally drop it as you are trying to turn the steering will and catch the seat or the mats on fire.

Driving takes complete concentration at all times, in part because you never know what other drivers will do and how it will affect your own driving. If someone runs a red light and you rush to try and avoid him and get out of his way, the car could swerve and the candle could fall and light something on fire. And if a fire starts, you may not be able to do anything about it if you’re tending to your driving responsibilities.

There is yet another reason that a lit candle inside of a car could be dangerous. Let’s say that you’re driving and there’s a lit candle that’s within grabbing distance of a rider in the vehicle. This means that it’s safe, right, since it isn’t interfering with the driver of the car? Not necessarily. That person could get nervous or stop paying attention while the car is moving and the candle could fall in his or her lap and catch on fire, which could be disastrous and even cause some serious burns and other injuries.

Another possible scenario is the lighting of a candle in a non-moving vehicle. Sounds safe, doesn’t it? But it may not be safe depending on the circumstances. Let’s say that you are driving long distances and you get tired. Then let’s say that you decide to pull over and rest for a bit but you light a candle first so you can take a look at the map feature on your cell phone before you decide to catch a few winks. Although nothing may go wrong, you could easily become a victim of carbon monoxide poisoning if you remain inside of the vehicle with a lit candle for too long.

In this situation, it is no longer an inconvenience or even an injury-causing occurrence; it could also be fatal. Of course, leaving your windows cracked can solve this problem but you still won’t want to sleep in a vehicle with a lit candle because too many things could go wrong. In other words, it is always a better idea not to have a lit candle in your vehicle.

And last but not least, you have to keep in mind that many types of car upholstery are flammable and so is the car itself. Accidentally dropping a lit candle can make your car seats explode suddenly and if the candle gets anywhere near an area where a spark might occur, the car can blow up as well. Okay, maybe these seem as if they are extreme circumstances that likely will never happen but nothing in life is guaranteed.

When it comes to lit candles, there is no such thing as being too careful. Open flames always have the potential to cause a lot of damages and injuries so it’s always better to be safe than sorry.

All of this being said, there are certain situations that may benefit someone by having a lit candle in a vehicle. More often than not, candles in a non-moving vehicle tend to be safe, but what are the situations that warrant this action? Is it ever really necessary to have a lit candle inside of a vehicle even if it isn’t moving? Read on to find out.

Although very rare, there are situations where having a lit candle inside of a moving vehicle is beneficial and safe. Most people think of being caught in a blizzard as a reason to keep candles inside of a vehicle at all times but it may not be for the reasons you think. The truth is that candles, regardless of their size or type, aren’t going to keep you warm if you have to stop on the side of the road for a while.

They may not keep you warm but they can work wonders in other ways. First of all, a lit candle can produce 75 to 85 BTUs per hour, which is enough to melt snow to drink. In addition, multi-wick candles can at least keep the inside of the vehicle comfortable and bearable for the time being even if they won’t necessarily keep you warm. It may, in fact, keep you comfortable enough so that you don’t become miserable while you’re riding out the snowstorm.

In fact, the more wicks you have in the candle, the warmer you’ll be. If you have more than one candle in the vehicle, you’ll be a little bit warmer.

You can also use tealight candles placed on the bottom of an empty coffee can to provide you with some light so that you can see better. After all, you won’t be able to leave the vehicle on for very long in this circumstance because you’ll run down the battery. Tealight candles in a coffee can will provide you with enough light to see what you’re doing, especially if you use several candles and not just one.

Although there are only a few situations where you might actually need to light candles and place them inside of a vehicle, there are some reasons why you might find them valuable when the vehicle isn’t moving. Many of the scenarios described above rarely happen to anyone. Let’s face it; most people will never want to light a candle inside of a moving vehicle. Non-moving vehicles, however, are different.

The best recommendation for someone even considering carrying candles in their car is to use them wisely. First of all, you have to be extremely careful in both moving and non-moving cars because the possibility of a fire is always there. Second, you have to also be careful with any item that you’re using to light the candle, e.g., matches or cigarette lighters.

Having a lit candle inside of a car always comes with the risk of something going wrong so if this is something that you’re considering, you need to think about all of the precautions before you decide for sure what to do.

You can try alternatives such as an essential oil diffuser.

If you are in a hurry and just want to find out what the best thermometer for candle making is, then we recommend the Yacumama Digital Liquid Thermometer as the best one. Making candles is...

Continue Reading
link to Can Candle Wax Catch On Fire?

Candles are very relaxing and pleasant to have around the house, but things can get out of control just like nearly anything that involves controlled fire. One question that many new candle...

Welcome. My name is Grace(Gege). I have personally tried over 100 brands of candles. The total burn time of these candles is over 5000 hours. I also talk about essential oil diffusers and reed diffusers. They are important alternatives to candles.