As the name states, Febreze Small Spaces are portable air fresheners that you can place nearly anywhere in your home. 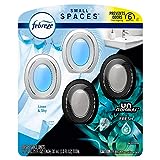 Even more important, Small Spaces fragrances are four times more concentrated than solid fresheners. And each unit releases fragrance up to 45 days.

This particular set includes four units, two each of Linen & Sky and Unstoppable Fresh fragrances. You can place them anywhere you’d like to eliminate odors, like the bathroom, near the garbage can, in the mud room, near your cat’s litter box, and so forth.

Febreze Small Spaces are a convenient solution for fighting odors and freshening up your home. What’s most useful about them is that they can reach spaces that a wall plug can’t.

You can stick these inside shoe cubbies, in closets, and other tucked away spaces. This is a great way to keep those areas fresh for more than a month without much monitoring.

But there are some things you may want to consider before buying Small Spaces.

These units sit on flat surfaces, like tabletops or shelves. They aren’t designed with a hook or two-sided tape. You’ll need to choose a place where you can sit the unit upright and out of the way.

Unfortunately, if you’re looking to freshen the interior of a diaper pail or garbage can, this isn’t the best option for either.

Currently, there are twenty-two Small Spaces scents available. Half of them fall into the fresh and airy category. But there are some fruity, sweet, floral, and holiday scents as well.

If you don’t typically enjoy the kind of scents you’d encounter with other Febreze products, you may not like these either.

If you plan to freshen and deodorize a large room with one of these, you may be disappointed.

One unit might be effective in a dorm room, but it likely wouldn’t be strong enough to fill a large living room or open concept floor plan. Small Spaces are ideal for bathrooms, closets, and other tight quarters.

Since this is an analog device, there isn’t a sound or light that reminds you to replace the unit after 45 days.

You will have to create a system for yourself in order to remember to periodically set up a new unit. If you would need or want a reminder, you may want to try a plug in freshener.

Throwing them out after 45 days is easier. Not having to plug them in helps keep the electric bill low. But since you’d have to repeatedly purchase and replace these units, that makes them unsustainable. They also can’t be recycled.

If you are concerned about the environmental impact, then you may want to consider an alternative to Small Spaces. I’ve listed a few suggestions below.

There are a few additional reasons why Small Spaces might meet your needs.

Another thing that makes Small Spaces different from the solid cones is that they wouldn’t create a mess if exposed to extremely warm temperatures. Small Spaces won’t melt, and you don’t have to worry about pets or young children attempting to touch or bite the freshener substance.

Instead, there’s a button on the back of the unit for you to press. Pressing the button punctures the pouch holding the fragrance, which releases it. Everything remains contained inside the unit for safety and low maintenance.

Safe for Little Ones

This product is safe enough to use around young children and most pets, except birds.

If you own a bird, you may want to place your Small Spaces freshener in a different room. This product can create respiratory problems for birds, especially if the room isn’t properly ventilated.

This is a big deal because most air fresheners simply make a room smell nice without cleaning the source of the bad odors. Febreze products are formulated with molecules that bind and trap odors, and then release a nice scent.

When it comes to fresheners and deodorizers, peoples’ experiences vary widely. Some people love the fragrances, and others strongly dislike them. Here is some customer feedback:

After reading about Febreze Small Spaces in this post, there might be a number of reasons why you may no longer feel that they would be a good fit for your needs.

With that in mind, I found a few alternatives that might better appeal to your needs or preferences. 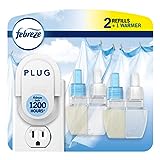 This Febreze alternative also eliminates odors instead of simply covering them up. If you would prefer to fill an entire room with fragrance, then you might want to try this electric oil warmer. Here are some highlights:

Lock in odor molecules without strong fragrances using these non-toxic fresheners. Made with activated charcoal derived from coconut husks, you can freshen your space without harming the environment. Here are more highlights:

From time to time, it helps to be able to use a spray freshener. You can’t control when and how much fragrance is released from Febreze Small Spaces, which can be inconvenient.

Fresh Wave products are made using natural ingredients. This particular bottle is lavender scented, but it doesn’t simply mask odors. This chemical-free formula tackles strong odors, including those from pets and cigarette smoke.

It is safe to spray this solution on furniture fabric, pet bedding, carpets, clothes, and similar surfaces without harming humans or pets.

Most importantly, instead of constant fragrance release, you can choose when to freshen up a space.

It can be off-putting to walk into a smelly bathroom, closet, or pet area. Smaller air fresheners offer a suitable solution for keeping those areas fresh around the clock.

Febreze Small Spaces can give you 45 days of freshness that also gets rid of odors altogether. They’re a non-messy alternative to solid air fresheners, and they’re strong enough to destroy pet odors. You can try it for yourself.

But Small Spaces air freshener isn’t for everyone. Remodeez deodorizer and odor eliminator is an unscented, environmentally friendly alternative.

link to Can You Reuse Incense Sticks? (Explained for Beginners)

Incense sticks vary in length and width, which impacts their burn time. If you’re in a pinch and need to cut short the burn time, you might wonder, ‘can you reuse incense sticks?’ It's...

Have you ever lit a scented candle that smelled so good that you wanted to eat it? Did you then pause and ask, ‘can you eat candle wax?’ Don’t feel bad if you did because you’re not alone....