Cash Money Candles, the question is in the name. How much money is inside? And how can they put money inside of a candle and why? Is this a joke? All of these questions swirled around in my head when I first heard about these candles.

As it turns out, there’s at least two dollars in every Cash Money candle. The company suggests that there might even be more money randomly placed in candle jars but these are claims that customers disagree with. Some people even stated that their $2 bill was a fake.

If you want to know all about what you can expect from these candles and whether cash money odds are worth the try, then keep reading.

The company is based in the United States and also sells, cash money bath bombs, floral bouquets with hidden jewelry, cryptocurrency candles, cash and jewelry slime, and more.

They have taken the cracker jacks and cereal box prize idea to a whole new level.

Why Include A Two Dollar Bill in Each Candle?

You might remember receiving a $2 bill from relatives during the holidays, for birthdays, or graduation. They were often given as a gift that was never to be spent. We used to save ours in a special place hoping to one day discover that they were worth much more.

Well this is part of Jewelry Candle’s motivation behind creating the Cash Money candle. They wanted to present an impressive way of reviving an old tradition. Instead of the $2 bill being slid into a greeting card, it’s placed inside of a candle like a buried treasure.

What Are The Odds?

According to the company, “every candle is a winner,” and there’s “cash in every candle every single time.” Apparently, there is at least one $2 dollar bill in every jar, and they also claim that you might find additional cash in your candle, up to one $100 dollar bill.

But you can even win up to $2,500 via a redeemable prize code that would also be found inside the candle.

The company frequently states that they are not a private lottery and since any additional cash is added to candles at random, there are no odds of winning. Their only guarantee is that customers will get one $2 bill in each candle.

How Are Cash Money Candles Made?

All Cash Money candles come in a tall glass jar that holds 21 oz of natural soy wax hand-poured over two cotton wicks to help the candle burn evenly. Aside from fragrance oil, the company doesn’t list any additional information about the ingredients used to make their candles.

You’ll discover that there’s more inside the candle as the wax burns down. Eventually, you’ll see folded tin foil. You would have to carefully remove the packet when the wax is liquefied. Blow out the flame, and then use tweezers or some other long tool for retrieval. When it’s cool enough to touch, carefully unfold the aluminum foil to discover your cash amount. 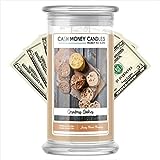 Smells like a fresh batch of spice cookies with a hint of fruit. This would be a nice Christmas holiday candle. 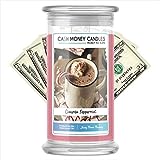 This candle smells just like a mug of spicy Mexican hot chocolate with peppermint. There are fragrance notes of nutmeg, cloves, cinnamon, vanilla, and hints of warm chocolate. 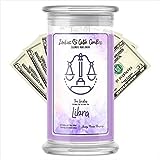 There’s also a Cash Money candle for every zodiac sign. This Libra fragrance is their Bahama Mama scent, which is fruity and sweet smelling – like sipping coladas on a tropical beach.

But you have the option of choosing from over 45 different scents to pair with your sign or that of the person you’re giving the candle to. That makes this one a fun gift idea. 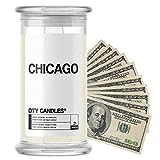 There is also a Cash Money candle for every major city. I’ve seen one for Virginia Beach, Miami, and more, but this one is for Chicago. Similar to the zodiac candles, you can choose from up to 30 scents for this city candle.

Unfortunately, this company does not seem to create a positive customer experience. They also don’t seem to be very responsive once a customer brings a problem to their attention. So below you will see an unusually high number of negative reviews.

The overall consensus seems to be that you could buy the candle for the fragrance, not the potential to win a cash prize. When there is a bill at all, it’s $2, usually nothing more than that. Individuals who have also gotten redemption codes seem to have a really hard time claiming their wins.

Are Two Dollar Bills Really All That Rare?

You can find an interesting detailed history of the $2 note on the US Currency website along with a closeup image of its current design.

The version of the $2 bill that we have come to know with the portrait of Thomas Jefferson on the front was first printed in 1862. Initially, they had little use because of a struggling economy. Over time, they were used to engage in unsavory behaviors. (Think along the lines of political bribery and husbands interacting with women who weren’t their wives, and so on).

Eventually, it became less common to use the $2 bill instead of a $1 bill. The government even stopped printing them in 1966. But ten years later, they printed 400 million special edition $2 bills to commemorate the country’s bicentennial.

The beautiful artwork of the signing of the Declaration of Independence on the back of the commemorative bill marked the first time that it was seen as something more than money to spend. Instead, people began collecting them and classified them as “rare.”

Our Bureau of Engraving & Printing still prints them; there are 1.4 billion in circulation right now. To put things in perspective, though, according to the Federal Reserve there are approximately 13.1 billion $1 dollar bills in circulation as of 2020.

There are fewer two dollar bills in circulation than any other commonly used bill, but because they are still printed regularly, you can ask almost any bank teller to include $2 dollar bills with your account withdrawal, and the teller will likely have them on hand to fulfill your request.

So overall, there are somewhat rare but not as rare as in times past. They may not be as easy to access in a small town as they would be in a major city. If you order a Cash Money candle and want to know what your $2 bill is worth, start your research with this chart.

There’s a lot of hype surrounding the idea of finding money inside Cash Money candles, but for one reason or another, the thrill has not led to consistently positive customer experiences.

If you’re still interested, I would suggest trying the zodiac candles or the city candles as a fun gift idea.

Even with the bad experiences, it might be a fun present for a friend or family member who’s into this kinda thing. Cash Money Candles seem to go over best with children or the elderly.

link to Can You Eat Incense? (Quick Facts)

It’s impossible to know exactly what ingredients are in your incense. However, knowing the possible side effects of common incense ingredients can give you a better idea of how safe it is to...

Continue Reading
link to What Does It Mean to Put a Candle in the Window? (Quick Facts)

There are some traditions that we notice and may even engage in over the years but may not fully understand the meaning of. Placing a candle in the window is one of those practices.  Putting...