Candles are such an iconic home decor item! They transform any space into a completely different atmosphere with their various scents. However, accidents do happen. Candle jars can become damaged in a number of ways. Whether it is from the shipping to the store or a tumble off a table, candle jars can be broken. We might assume they should be strong to hold all the candle wax, however, it is just as vulnerable as other glass items.

When a candle jar becomes broken, some might ask, “Can you burn a candle in a broken jar?”. While it might be tempting to salvage the candle and its jar, burning a candle in a broken jar is not safe. Broken jars can be defined as small cracks or even larger chunks of glass missing from the jar. These cracks or open spaces are now posing a fire risk as melted wax from the candle can escape. If the hot, liquid wax seeps out and touches something flammable, fires could occur.

It is important to always check candles when we buy them for any imperfections. A small blemish or splintered look in a glass jar might not seem harmful, however, it is an accident waiting to happen. The glass on the jars should be smooth to the touch and look clear and undisturbed. Anything less than this is simply a risk we should not take. Candles in stores can experience these imperfections from shipping to the store or even during associates stocking them on shelves. It takes less than a minute to scan over the surface of a candle jar before buying it to ensure it is not damaged or cracked in any manner. 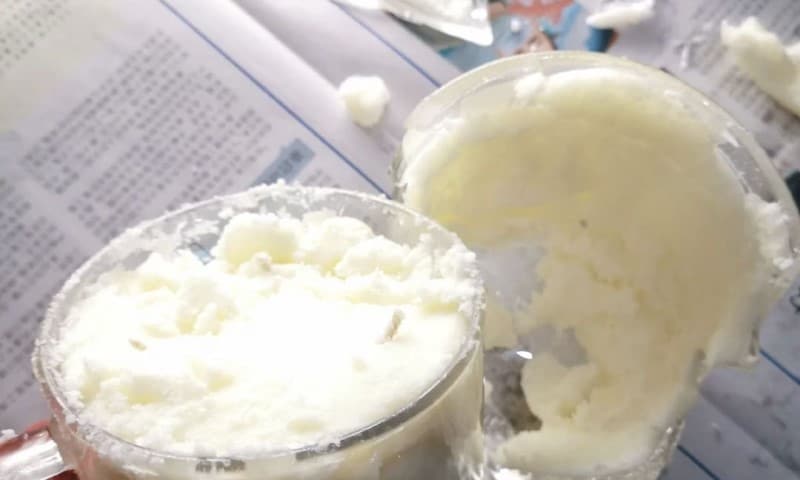 Contents show
What to Do with Broken Candle Jars
Make a new candle
Use the wax in a wax melter
Make firestarters for camping
Create fun shapes!
Other Methods for Removing Wax from Broken Candle Jars
Freezing
Use of a blow dryer
What Temperature Does a Candle Burn At?

What to Do with Broken Candle Jars

While using a broken candle jar isn’t safe because of hot wax seeping through the cracks or small holes, there are other things that can be done with broken candle jars. Sure, we could toss them in the garbage, however, they cost entirely too much to just throw away. If an accident happens at home where the jar is knocked down and becomes cracked, stay away from the garbage! Repurposing the wax in the jar is a great way to get the most out of a bad situation! Below are the best ways to repurpose the wax from broken jars!

The wax in a broken jar is perfectly usable. The trick is getting the wax out of the broken jar. Always use precaution when handling the broken jar which may include wearing gloves or even oven mitts to ensure no cuts occur. The easiest way to get the wax out of a broken jar is by using boiling water to soften the wax from the edges of the jar. Boiling water can be poured around the candle in a deep stove pan or putting a bowl over a pan of boiling water to create a double broiler will loosen the wax as well. Once the wax is melted, it can be transferred to a new candle container and fresh wicks can be inserted (these can be bought at craft stores). Read our article ‘ How to Make Scented Candles at Home? (Step-by-Step Instructions)‘

Use the wax in a wax melter

Once removing the wax from a broken jar, the creativity can begin! While making a new candle is a great idea, using the wax in a wax melter is another wonderful repurposing idea. After removing the melted from a broken candle jar, always allow it to cool down before handling. In fact, transferring the wax into a loaf pan that is lined with parchment paper will let it solidify into a rectangular block. This can be easily sliced and diced to be used in a wax melter. It is important to note that not all waxes are the same. Some waxes melt at different temperatures. While wax meters can reach 110 degrees Fahrenheit, it may not melt wax at the rate needed to produce a scent.

Camping is a beloved summertime activity with the family. Campfires are the pinnacle of these adventures and leftover candle wax from a broken jar can be helpful! To make a firestarter for camping, the melted wax should be combined with some old dryer lint. This idea also helps repurpose dryer lint that typically gets thrown away. Mixing the lint in with melted wax and pouring them into an old cardboard egg carton is the first step. The wax will harden over the lint. When it is time for the fire to get started, simply toss the whole egg carton into the center of the fire ring. The combination of lint, wax, and cardboard will start up the fire easily!

Perhaps one of the most creative ideas for candle wax is making fun shapes out of the wax! Old cookie cutters can be used on a cookie sheet lined with parchment paper. Simply pour some of the melted candle wax into the shapes and let it harden. The shapes can be put into a decorative glass bowl to spruce up spaces like the bathroom or a coffee table. To take this idea even further, while the wax is being poured into the shapes, a string can be placed at the tops of the cutters so it can harden with the wax. This creates a hanging ornament that is perfect for the Christmas tree!

These ideas are meant to spark creativity and reduce waste. While there are other ideas out there, these are the best ones for repurposing old candle wax from a broken candle jar!

Other Methods for Removing Wax from Broken Candle Jars

Quite the opposite of heating the wax, freezing has shown to be a useful method for removing wax. The freezing process causes the wax to shrink away from the glass. This makes it much easier to slide a butter knife between the wax and the glass to gently pop it out of the glass. This method obviously takes a bit longer as waiting for something to freeze over is slower than waiting for something to heat up and melt.

Use of a blow dryer

This method might also take a while to get the job as well. Blow dryers, or hair dryers, typically only reach a temperature of 140 degrees Fahrenheit on their highest setting. While the temperature is sufficient, it is the actual process that will take up the most time. If using this method, always ensure the area is clear and free of any fabrics and it is an open space. The dryer can be held within 4 inches of the candle jar to help loosen the wax from the edges. It might take a bit to achieve the desired result, but it can loosen the wax to allow for a butter knife to slide between the glass and wax.

These alternative methods are last-ditch resorts for removing wax from a broken candle jar. They give options to those wanting to try all outlets for any wax, especially stubborn wax!

What Temperature Does a Candle Burn At?

Why is the temperature of a candle important? Well, this helps put into perspective the answer to “Can you burn a candle in a broken jar?”. The melted wax may be cooler than the flame, however, it is still hot enough to pose burning and fire risks. It also showcases how the heat from boiling water is not meant to completely melt the wax from a broken candle, rather loosen it so it can be removed with a butter knife.

When repurposing the wax, it does need to be completely melted though so it can reform and solidify again. The broken jar may leave bits of glass behind, which is why the wax should only be heated to loosen and popped out from the glass. From there, the wax can be washed and rinsed in a sink to remove any remain glass particles. The wax can then be melted to a liquid state, preferably in the double-broiler method of a heat-proof container over a pot of boiling water. From this point, pouring the melted wax into a measuring cup for distribution into whatever it is being repurposed as is the best approach.

Broken candle jars aren’t the end of a candle’s life. More importantly, we spend too much money on them to waste them. Being creative and finding a way to reuse the wax helps salvage a perfectly good candle!

link to Can You Use Reed Diffuser Oil in an Electric Diffuser? (Quick Facts)

Electric diffusers were created to experience the benefits of aromatherapy. Reed diffuser oil isn't created to release any therapeutic benefits; its purpose is solely to add fragrance in a beautiful...

It can be difficult to determine whether moderately-priced essential oils will provide you with the same level of health benefits as more expensive essential oils. Rocky Mountain Oils is a...