Candles can be excellent mood-setters, but many people have concerns over their fire safety and emissions.

Well, if you are also worried about those, then flameless candles may be the answer! On our best flameless candles, we’ll demonstrate what these candles’ benefits are, as well as will help you pick the right candle (if you want to buy one, of course).

In this article, we’re going to review the following flameless candles: 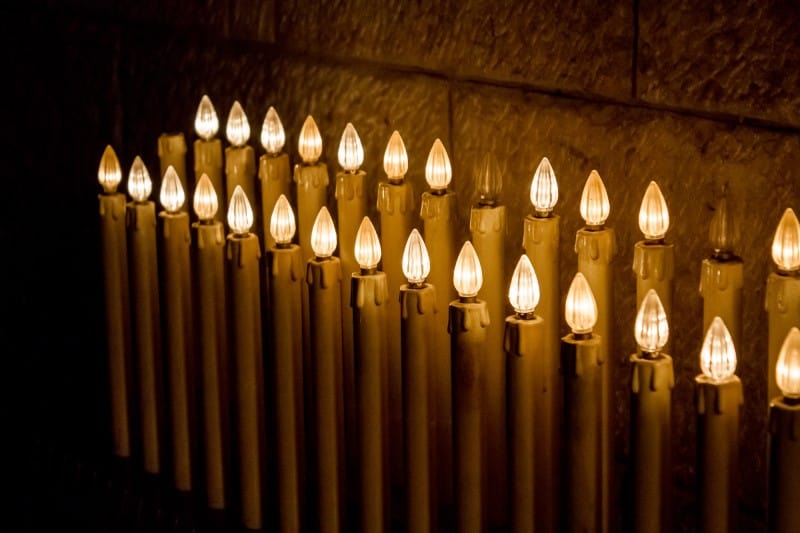 What Is A Flameless Candle?

The phrase “flameless candle” is ambiguous and doesn’t really tell you much about this candle type, so we feel that we should clarify what flameless candles are.

Flameless candles are an electronic type of candle. Typically, they use LED bulbs powered by batteries to deliver light. These candles have a number of interesting benefits that may matter to some people:

As long as you don’t really care about having authentic candles, flameless LED candles can be really good at setting the mood. Their benefits make them a great buy as well.

Things To Look For In The Best Flameless Candle

It’s not that difficult to choose a good flameless candle. However, if you know what to pay attention to, you will probably be able to find the right flameless candle easier. With this in mind, let’s talk about the most important features to consider in flameless candles.

Flameless candles typically have plastic housing, but some manufacturers may actually use real wax to make these candles.

LED candles with wax bodies look nearly identical to traditional candles. The only thing that can give a wax flameless candle away is the flame effect produced by the LED bulb. However, flameless candles generally look pretty realistic, so it’s difficult to tell what you are dealing with until you look really closely.

Wax doesn’t melt in flameless candles – this is because LED bulbs do not produce as much heat as an open flame. Thus, wax flameless candles do not create a mess and retain their shape. With that said, if the LED lights get hot, they might melt the wax very slowly, but this usually doesn’t happen.

Flameless candles usually have some degree of light adjustability. Although flameless candles can look good without any changes, some adjustments may be useful if you want to achieve a perfect candle feel.

Among the things that flameless candles may allow you to adjust are:

These settings are usually adjusted via an included remote control.

What may also be important to some people is the number of included remote controls. If you will be distributing the candles in different rooms, then it would be best to have as many remotes as there are rooms with candles. This will make things a bit more convenient since you won’t have to go looking for the remote each time you want to adjust something.

The candle size probably won’t be too important, but you may want to pay attention to it as well. The size would be important if you were looking to complement an existing set of flameless candles or if you want to place the candles in candelabra.

Some flameless candles may even have a fragrance diffusing capability for a more realistic feel. This feature can be useful with either plastic and wax flameless candles, so if you want the best experience, pick a candle set that emits scents.

Finally, if you are going to buy a lot of candles, then consider the cost of the flameless candles as well.

Generally, the more candles a pack includes, the more cost-efficient it is. However, cost efficiency also depends on the features. If you want real-looking adjustable wax candles, then you will probably have to pay more.

To assess how cost-efficient a flameless candle pack is, you may calculate how much money you are paying per included candle. Go for the cheapest set that can satisfy your needs.

But in spite of a regular candle, this flameless candle set also allows for versatile lighting adjustment. Via the included remote, you can set such things as flickering, flame brightness, as well as make the candles stay on for 2/4/6/8 hours.

This particular YIWER set comes with 3 flameless candles, 1 remote control, and an instruction manual. It would also be great if YIWER included the required AA batteries, but alas, you will have to buy them yourself. As claimed by the manufacturer, high-grade AA batteries can allow for over 300 hours of runtime for the candles, which is relatively good.

We also didn’t mention the size of the included candles – all have a diameter of 3.15 inches, but the height is 4, 5, and 6 inches.

If realism is secondary for you, then this 12-pack from Enido perhaps will be the best option for you.

Instead of wax, the Enido flameless candles are made from plastic. And although this means that the candles won’t look very real, it also implies a few benefits.

First off, you obviously won’t have to deal with any wax messes.

Secondly, the Enido candles are actually water-resistant, so you should be able to use them while bathing or outdoors. This arguably is the biggest advantage of all-plastic housing in the Enido candles.

Functionality-wise, the Enido flameless candles seem to be identical to the YIWER candles. Both kits come with very similar remotes, so you can adjust the flickering, lighting time, and brightness level of the Enido candles.

You are also getting 2 remotes with this pack, which might be great if you will be placing your candles in different areas.

In terms of batteries, the Enido kit requires AA batteries but comes with none. Enido claims a battery life of about 200 hours with high-grade batteries, as well as 50,000 total hours of runtime for the LED lamps.

The Antizer 9-pack is pretty similar to the YIWER flameless candle kit reviewed in the beginning. This mainly applies to the feel – both candle sets feature wax candle housings for a more realistic look.

The similarities also carry on to the functionality – the Antizer candles have adjustable flickering, brightness, and a timer.

Although pricier upfront, the Antizer flameless candle set offers better value for the money than the YIWER kit because the latter comes only with 3 candles. If you are on a budget, perhaps the Antizer set will be a better option for you.

The TOFU flameless candles are also very similar to the YIWER candles, but there’s one big difference – the candles here are placed in beautiful glass shells. The previous flameless candles on the list certainly didn’t look ugly, but the glass in the TOFU set makes for a better sight, in our opinion.

What further improves the look of these candles is that they all feature real wax. For added realism, you may adjust the candles’ brightness and flickering, as well as set a timer from 2 to 8 hours.

The TOFU candles are 4, 5, and 6 inches tall and 3 inches in diameter as well, which is a little thinner than the YIWER candles.

In spite of their similarities, the TOFU candles seem to have shorter battery life than the YIWER ones. At least, TOFU claims that the battery life is over 200 hours with high-grade batteries, while the runtime of the YIWER batteries is claimed to be over 300 hours, if you remember.

And lastly, we have this flameless candle 12-pack by Homemory.

Even though this flameless candle kit isn’t as functional as the previous ones (it has no light adjustment), it is insanely popular and highly rated. On Amazon, the Homemory 12-pack has 4.6 stars and over 6,000 reviews, more than any other candle set on our list.

The Homemory candle pack offers great value for the money because the candles look pretty decently despite the limited functionality. The housing in these candles is made from plastic, but they still look quite good. And although the candles have no light adjustment, their flickering effect is quite convincing.

Of course, this candle set can’t compare with pricier ones in terms of realism. But for the money, you probably won’t find anything better.

So which flameless candle is it going to be for you?

Our personal pick is the Homemory flameless candle pack. This pack is cheap, very highly rated, and looks pretty good in spite of being made from plastic.

In the second place is the Antizer Flameless Candles 9-Pack. These flameless candles have a real feel thanks to the wax, allow you to somewhat adjust the light effect, and also don’t cost too much.

This is just our opinion though, and you may go for any other flameless candle on our list.

For example, as an alternative to the Homemory set, you may consider the Enido Flameless Candles 12-Pack. This pack should deliver a similar vibe, but it’s a little more functional thanks to the adjustable flame settings and the water resistance. It’s also pricier, however.

If you are in a hurry and just want to find out what the best thermometer for candle making is, then we recommend the Yacumama Digital Liquid Thermometer as the best one. Making candles is...

Continue Reading
link to Can Candle Wax Catch On Fire?

Candles are very relaxing and pleasant to have around the house, but things can get out of control just like nearly anything that involves controlled fire. One question that many new candle...

Welcome. My name is Grace(Gege). I have personally tried over 100 brands of candles. The total burn time of these candles is over 5000 hours. I also talk about essential oil diffusers and reed diffusers. They are important alternatives to candles.